We are growing Barley this year. One major fungal issue with Barley is Loose Smut. It comes from the fungus Ustilago nuda, and can wipe out barley crops. 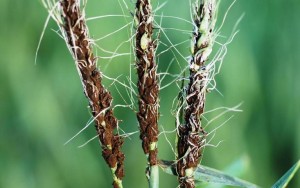 The fungus replaces the entire grain heads with a mass of black or brown fungal spores. There are no seeds to be harvested on these heads. You can usually pick these infected plants out because they are taller and mature faster than the rest of the field. The teliospores get transmitted to other grain heads where they infect the seeds through the flowering stigma, or directly through the ovaries. These teliospores give rise to basidiospores. These basidiospores germinate, and the mycelia invade the developing embryo in the seed. The fungus stays alive inside the seed until next season. END_OF_DOCUMENT_TOKEN_TO_BE_REPLACED