Anyone who has grown anything has at one time or another come in contact with some type of Aphid. There are over 4,400 species of Aphids worldwide, and are affectionately termed “plant lice”.  Pea Aphids attack forage crops such as Peas, Alfalfa, and Clovers. They can take out a crop within a series of weeks due to their rapid expansion. 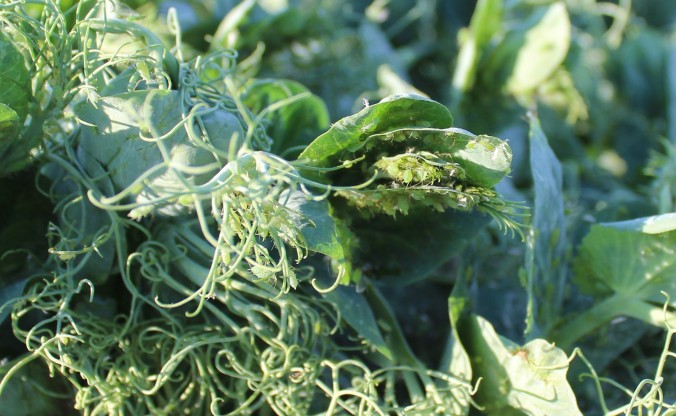 Pea Aphids start out the season from over-wintered fertilized eggs. These eggs are usually laid on the host plant in which the Aphids were infecting, however, they can also be laid in trees or other structures like houses. The larvae in the eggs are extremely resilient. The larvae goes through embryogenesis until the weather reaches a certain threshold. Then they enter a stage known as diapause. “Diapause is characterized by the slowing of the metabolism, a reduction or elimination of cell division, or a cessation of morphological development during adverse weather conditions.”¹

Pea Aphids go through a mode of development known as Hemimetabolism. This is a form of incomplete metamorphosis where there are three distinct stages: Egg, Nymph, and Imago (Adult Stage). There is no Pupa stage, and the Nymph somewhat resembles the adult, however it will lack wings and reproductive parts.

As the Nymph hatches from the egg, they are all female. These female nymphs will go through 4 molts before entering the adult stage. Once in the adult stage, these Aphids will begin to reproduce by viviparous parthenogenesis (a natural form of asexual reproduction where the growth and development of embryos occur without fertilization). They can give birth to 4 – 12 nymphs per day. These nymphs mature in 7-10 days, and each adult can live up to 30 days.

In the autumn, the length of day initiates the development of a single generation of sexual individuals. Inseminated sexual females will lay overwintering eggs to emerge in the Spring.

Overcrowding or poor food quality can cause the development of winged females who can travel to another site, and begin reproducing asexually.

“Pea aphids extract sap from the terminal leaves and stem of the host plant. Their feeding can result in deformation, wilting, or death of the host depending upon the infestation level. Plants that survive heavy infestations are short and bunchy with more lightly colored tops than those of healthy plants. Wilted plants appear as brownish spots in the field. Moreover, plants are often coated with shiny honeydew secreted by the aphids, and cast skins may give the leaves and ground a whitish appearance. These aphids also transmit the pea enation mosaic and the yellow bean mosaic viruses.”²

You scout or sweep in one of two ways:

1.) Check the number of aphids per plant tip. The threshold for treatment is 1-2 per plant.

Treatment is difficult as Pea Aphids exhibit a behavior called “Dropping”. When they sense danger, they simply drop to the ground where they have cover.